The Easter Rising; then and now

Frederick Heeley was born in 1880 and was a colliery labourer (surface). He was married to Eva as recorded on the 1911 census.

Many thanks to Mike Orme we now know that Frederick transferred to the Labour Corps in October 1917. The Service record for 403699 William Huff narrows the date to close to the 8th October 1917. By that time Frederick would have been 37 years old and had served with the trenches for 6 months. It is highly likely that he was no longer medically fit for front line service.

He was eventually discharged in September 1919 due to sickness. His pension record card states that he suffered from rheumatism that was attributable to his Army service. After the War he lived at 1 John Street in Brampton. Frederick died in 1960.

“Very heavy enemy barrage on front line from 5.0am to 9.30am. Enemy attacked at 9.30am. Battn suffered very heavy casualties”

So wrote KJ Bunting, Captain and Adjutant  to the 2/6th Battalion; however, this short sentence belies the enormous casualties that the 2/6th Battalion, along with the 2/5th and 7th Battalions of the 178th Brigade, suffered during the first day of ‘Kaiserschlacht’; the German Spring offence of 1918.

Unlike the 2/5th and 7th Battalions, the War Diary of the 2/6th Battalion does not record the precise numbers of casualties suffered that day (i.e killed, wounded or missing).

However, the 178th Brigade War diary does provide a total number of casualties for each Battalion. The strength of the 2/6th Battalion on 1st March 1918 was 53 Officers and 883 Other Ranks, thereby suggesting that approximately 20 Officers and 220 men were left in reserve and took no part in the fighting. 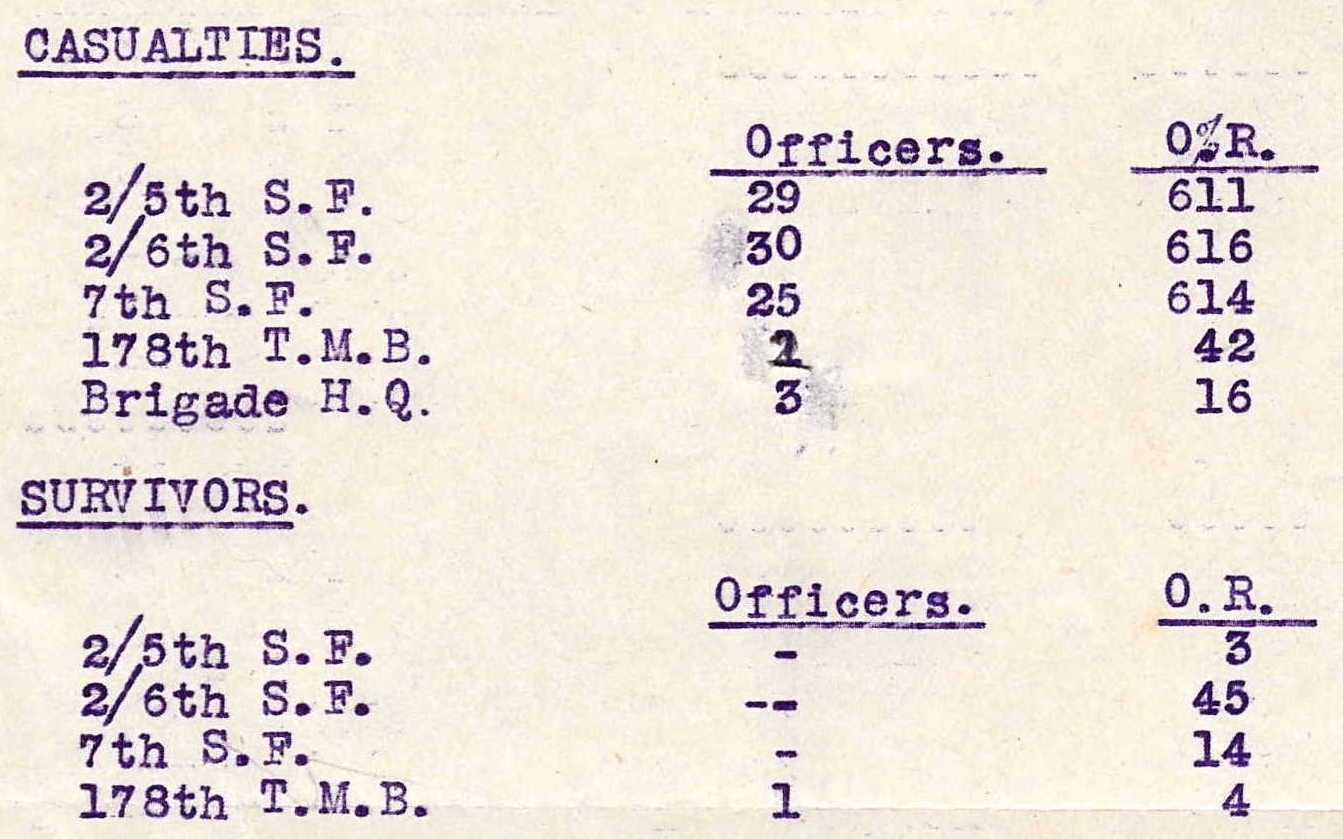 The 59th Division War Diary gives slightly higher casualty figures of 34 Officers and 722 men wounded or missing. In addition, they acknowledge that the numbers of wounded men were not reported by Medical Units, and therefore a proportion of other ranks listed a ‘missing’ may have in fact been wounded. 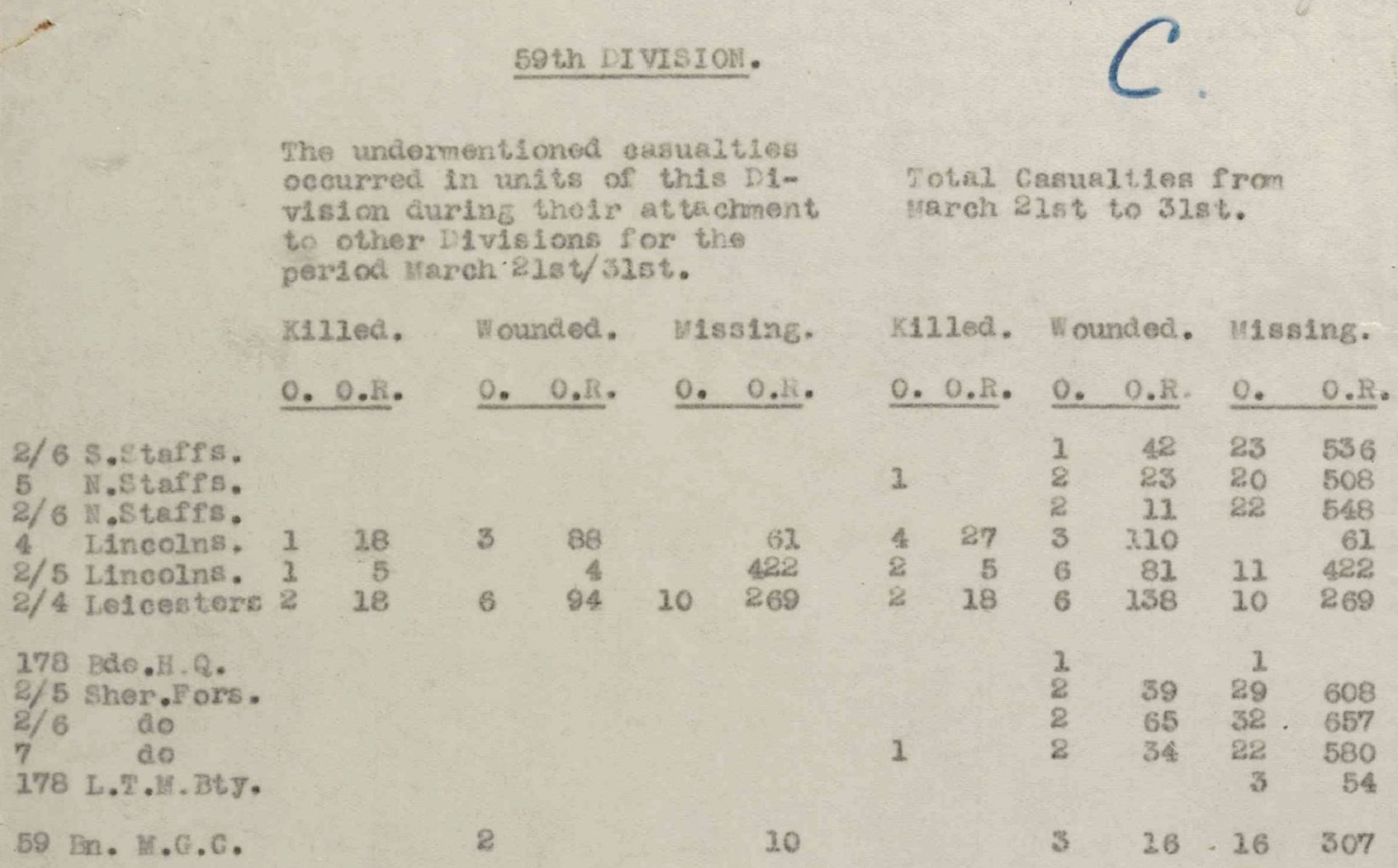 Very few personal accounts exist of those chaotic few hours, several Officers wrote of their experience after the War and a few stories appeared in local newspapers at the time.

Below are a few examples. 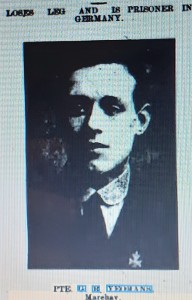 “We were holding the line on March 21st 1918. I was wounded in the left leg by a gun shot and taken prisoner a few hours afterwards. My leg was amputated April 8th 1918 at Cassel Germany”

“Our Battalion was in the support trenches, having come out of the first line trenches two days earlier. We found the Germans putting down a barrage of gas shells. We stood to until eleven o’clock, by which time the trenches had been blown flat and many casualties sustained. A runner came up and said the Germans had broken through. I had to take that message to our Battalion headquarters, and after I had been there about 15 minutes I was surprised to see hundreds of Germans all round us.

By this time part of the Battalion had already been taken prisoner, but the rest of us were told to get behind a sunken road and fight it out. There were machine guns at either end, and although we fired as hard as we could at the oncoming Germans they swarmed forward in mass formation, other parties coming down the communication trenches. We put up a hard fight until by one o’clock we had no ammunition left. Our last lot of bombs were useless, as somebody had left the detonators behind.

After having done a lot of execution we retired from the sunken road into a trench, the end of which was blocked so that we could not get out. About twenty of us scrambled up, however, and made a rush under heavy machine gun fire to another trench on the right, fifty yards away. There we met some Lincolnshire reinforcements, with whom we put up a big bombing attack. Fritz bombed us back until our casualties became so heavy that we found it was hopeless to go on fighting, so one of the sergeant-majors ordered us to put our arms down and are hands up.”

“We were very quickly surrounded and our lines became too hot to hold from crossfire. Retired to our support line; shall never know how I reached same untouched, was walking through our own and the enemy’s barrage. Had a great number of casualties whilst crossing. On reaching support managed to put up a show there but was surrounded about 9:40 a.m. and taken prisoner about 45 minutes after the enemy left his front line.”

The last stand of the 178th Brigade 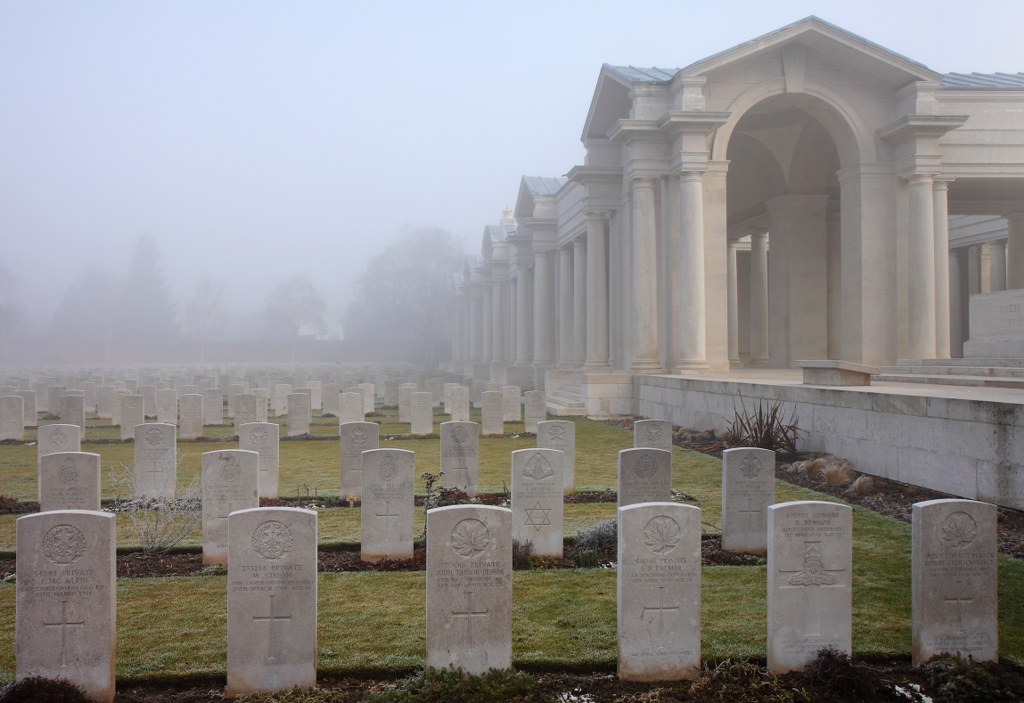 The vast majority of men that were killed that morning have no known grave and are Commemorated on the Arras Memorial to the Missing.

There are several important inferences that can be made:-

Major John Warren MC, 2/Lt Albert Catterall and a few men of the 7th Battalion were able to escape from the German’s surrounding their front line positions and make a ‘final ‘stand in sunken road in 4d – see 1), 2) and 3).

CSM John Tomlinson, although recored as serving with the 2/5th Battalion, had mostly likely been attached to the 2/6th Battalion when he was killed – see 4).

Several men from the 2/6th Battalion, most little from the HQ Company, were able to escape being surrounded in Railway Reserve – see 6), 7) and 9).

Recruiting for the 2/6th Battalion took place at the Drill Hall in Chesterfield and at the various Company Headquarters throughout Derbyshire. In most cases, as the men were enlisted they were paid 3/- per day pay (including billet allowance) and 3d a day for clothing allowance and sent back to their homes until they were called up.

“Surg.-Major AW Shea……..was also on that well remembered march out of Chesterfield, mounted, as always, on the popular “Sceptre” (alias “No. 9”). We remember the doctor because of his many waved farewells, which were all faithfully reordered by the cinematograph. 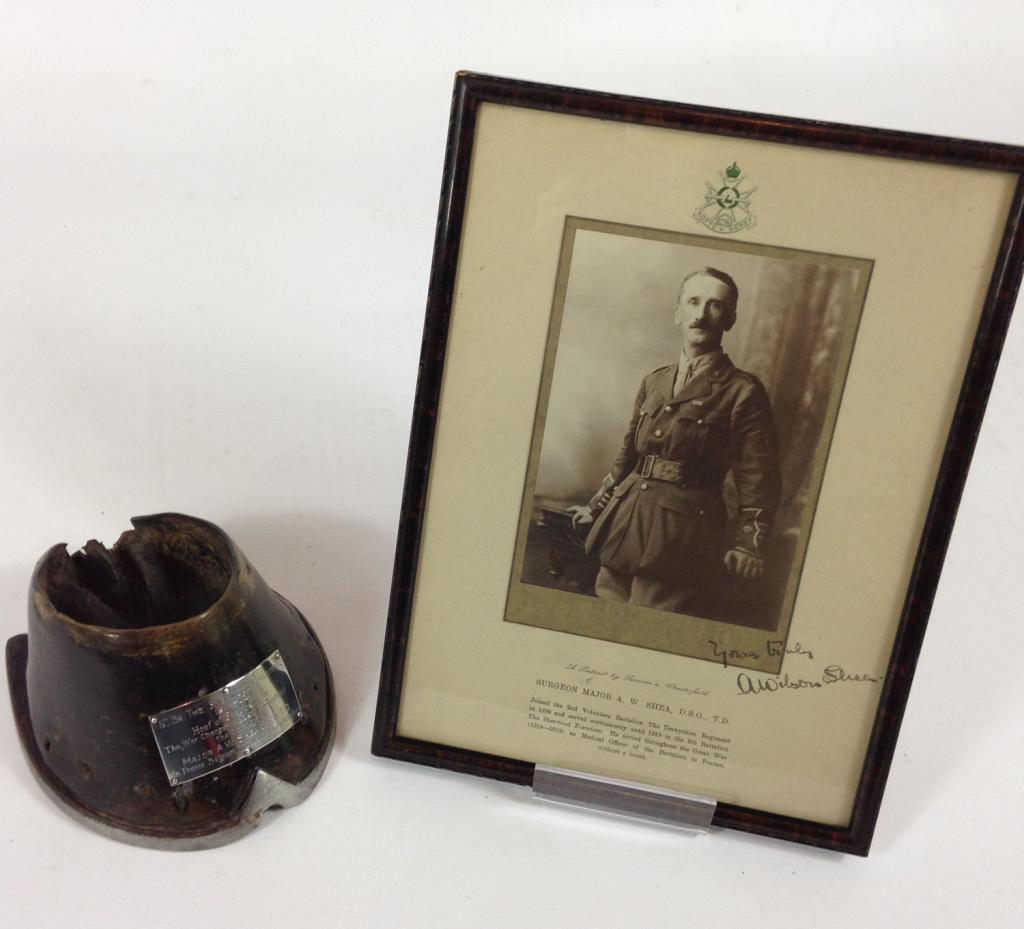 “The crowds who cheered were also permitted a smile and a joke at our transport. Little wonder, for its variegated collection. The furniture-remover’s van, the brewer’s dray, and the grocer’s cart, even the farmers waggon, found their place in the column.”

Over the last few years I have concentrated on telling the story (the best that I can) of the men that served with the 1/6th Battalion.

In the process I have somewhat neglected the men that served with the 2/6th Battalion, and of course their story is just as important.

Fortunately, over the years I have collected post cards and other ephemera that are related to the 2/6th – the ‘Green Triangle’ – so I have now decided that the time is right to tell their story; either on-line or by print.

Interestingly, the 2/6th Battalion were engaged in a limited number of historically important actions; these being:-

In those later five engagements the 2/6th suffered horrendous casualties and the Battalion was reinforced on many occasions; however, in the end the ‘2/6th’ were reduced to Cadre on the 7th May 1918.

George enlisted into the Sherwood Foresters in 1916 and was posted to the Depot of the 4th (Reserve) Battalion. Following training he was posted to the 9th Battalion on the 14th August 1917 and proceeded to France. On arrival at the 14th Infantry Base Depot he was transferred to the 2/7th and joined the Battalion in the field on 14th September 1917 and posted to A Company.

By November 1917 George had been promoted to Sergeant, but had also contracted ‘trench foot’ and was returned to the 16 General Hospital in England. On his return to France on 8th March 1918 he returned to the 2/7th Battalion.

George and his comrades were in the front line trenches at dawn on 21st March when the Germans commenced their Spring Offensive.

Like many of the men of the 178th Brigade George was reported as missing.

In the Summer of 1918 Nellie Carter submitted a request to the Red Cross (presumably via the War Office) if there was any information on her missing husband. She was later to hear the terrible news that George had been killed on the 21st March 1918.

His body was never recovered and he is now Commemorated on the Arras Memorial.

On the 1st September 1916 the 5th Reserve Battalion Notts & Derby Regiment was formed through the amalgamation of the 3/5th and 3/6th. 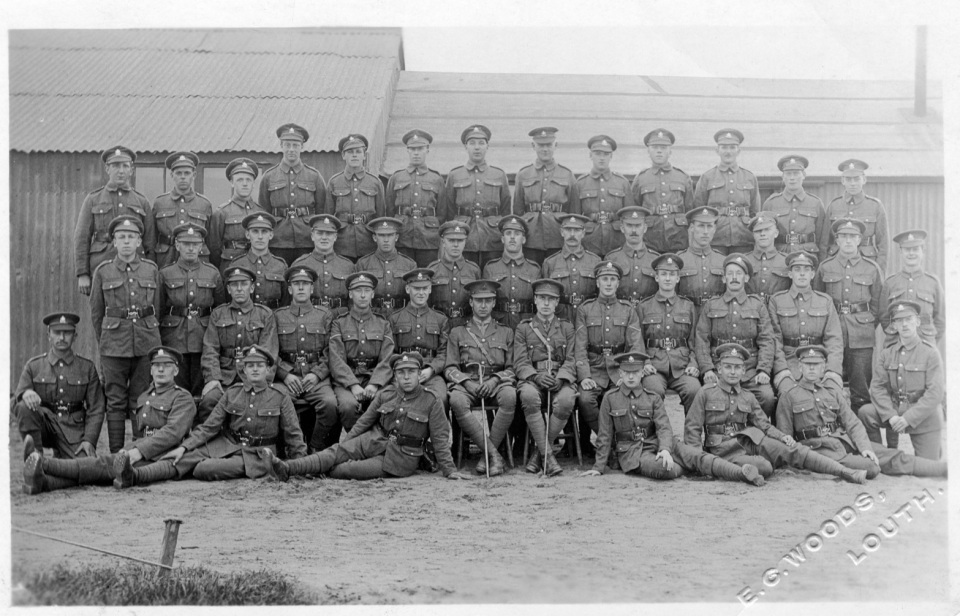 The Reserve Battalions were first station at Swanick before moving to Lincolnshire in mid-1916. At this time they were house in huts around Saltfleet, Louth and Somercotes.

The training of conscripted soldiers during 1918

From examining the Army Service Records of men that were mobilised during 1918 it would appear that the 3rd, 4th and 5th Reserve Battalions provided significant training of the new recruits.

According to Soldiers Died in the Great War (1914-19) only nine men died whilst serving with the 5th Reserve Battalion and for most of these their service records are available.

It would appear that the first cases of ‘influenza’ were contracted during the summer of 1918.

In contrast to SDGW the Common War Graves Commission lists a further 7 men that died between the 14th-19th November 1918.