24.7.1916 BELLACOURT: A patrol of 2/Lts E KERSHAW & FR OLIVER & 2 OR penetrated gap in TALUS are they lay on bank. Whilst there they were challenged by a German patrol who fired, severely wounding 2/Lieut OLIVER. Pte Webb missing. Others got back with valuable information. 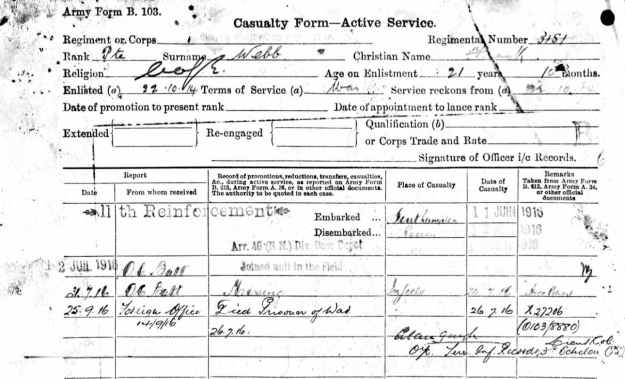 Army Service Record for 3158 Pte Frank Webb, a hairdresser from Stow-on-the-Wold who enlisted in October 1914, which records his death as a Prisoner of War. Frank had only arrived in France with the 11th Reinforcement in June 1916.

Frank’s body was not recovered after the War and he is now Commemorated on the ARRAS MEMORIAL.

2nd Lieutenant Frederick Richard Oliver (above) was Commissioned (from the 1/5th Battalion) in December 1915 and joined the 1/6th Battalion on the 6th June 1916. Frank’s body was not recovered after the War and he is now Commemorated on the THIEPVAL MEMORIAL.

It’s not clear why Frank Webb and Frederick Oliver are Commemorated on different Memorials to the Missing; despite being wounded and captured at the same time.

Perhaps because Frank Webb was initially a wounded POW and buried somewhere in the rear area means that he doesn’t officially belong to the ‘Missing of the Somme’ ?

24th: A quite day. During the night a patrol reached a point close to the SW corner of the TALUS but none of the enemy were seen.

1 Officer and 1 OR wounded.

Also on this day 3044 Pte Thomas Richard Seymour of the 1/8th Battn was killed in action. At this time the 1/8th Battn were holding the front line trenches of the RIGHT SECTOR. Thomas is now buried in GOMMECOURT WOOD NEW CEMETERY at FONCQUEVILLERS (Plot IV, Row C Grave 7).

However, he was the only man of the 139th Infantry Brigade to be originally buried in a small soldiers cemetery just behind the front line.

Burial Return from the No 19 Graves Registration Unit dated September 1920 and recording the exhumation and reburial of 10 men who had originally been buried at Bretencourt Military Cemetery located at 51. R. 27. d. 1. 4. (see below)

BRETENCOURT FRENCH MILITARY CEMETERY on the West side of the bridge between Bretencourt and Blamont Mill, in the commune of RIVIERE. Here were buried 233 French soldiers and 38 from the United Kingdom; three men of the Indian Labour Corps; and one German prisoner.

Once again many thanks for visiting – July was a record with 3667 page views and 661 visitors – I am amazed at so much interest!

AND FINALLY, still trying to identify these two Senior N.C.O.s

The man on the left is wearing the Egypt Medal (1882-1889) and The Khedive Star (1882 issue) – suggesting that he had previously served with the 2nd Battalion Derbyshire Regiment.

Superb find! Links 1917 to 2014
Thanks for posting
History of 21st Battalion here
https://derbyshireterritorials.wordpress.com/21st-battalion/

The recent loss of sand from our beaches has uncovered a remarkable piece of military history, albeit a rather small one.

Former Walton lifeboatman, Keith Richardson, picked up this remnant of an army cap badge while searching among the stones and rocks around Sloper’s Nose at Southcliff. 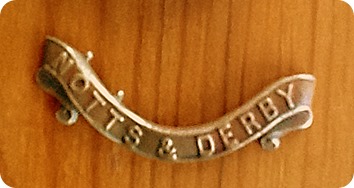 It is only the name part of the cap badge which is made of brass.

The remainder of the badge which was formed in an inferior metal has not survived.

This is what the full cap badge would have originally looked like. 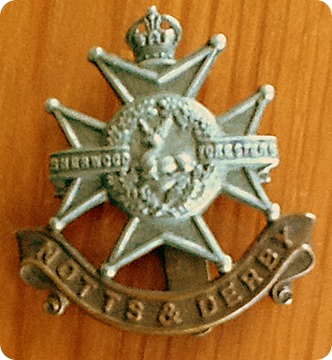 Keith kindly showed me his find as he wondered if this same badge appeared on the military group photo which I posted here back in November last year.

Subsequent information from military historians can be seen here.

Thanks to BRONNO we now know that the Officer is Henry NEWTON.

Confirming that this is a picture of the 5th (Derby) Battalion, Machine Gun Section taken in 1912.

1) Picture taken by A Heath from Clay Cross at the 1912 Abermaide Camp and showing the Machine Gun Section. 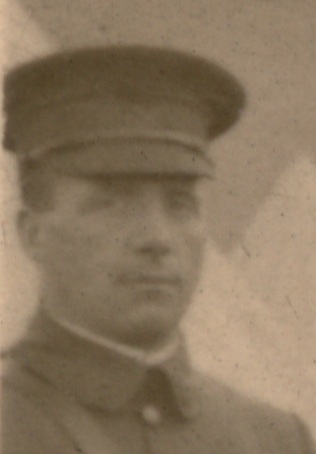