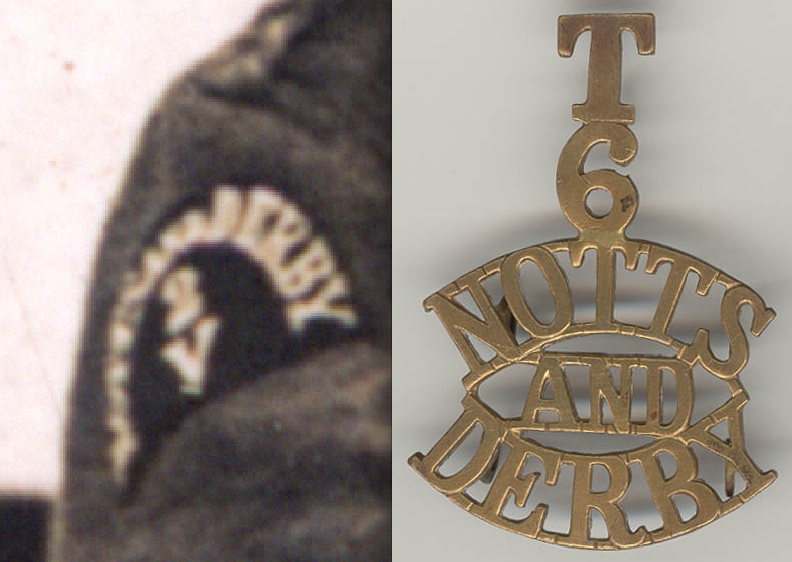 “Gentlemen if you please”, and as the men formed an orderly line Broomhead found himself at the front and thus became No. 1 Regimental Headquarters Sergeant. 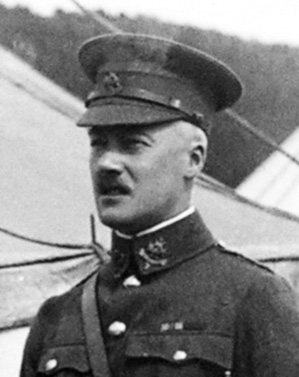 Articles from the High Peak News describing the change from Volunteer Force to Territorial Force in 1908. 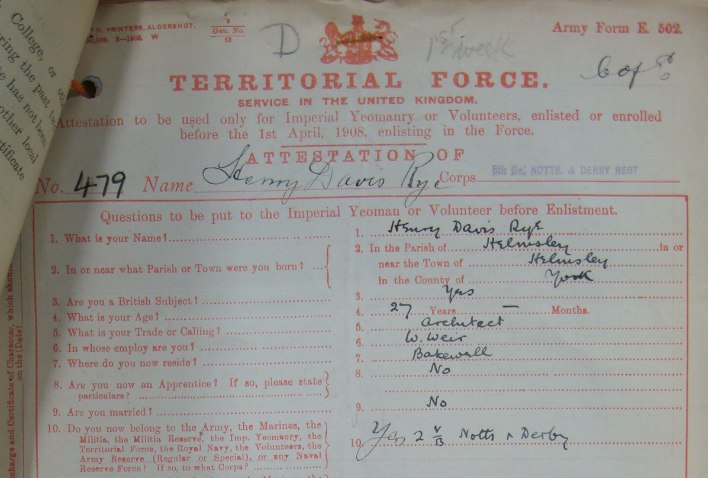 The attestation form of 479 Henry Davies Rye who enlisted into “D” (Bakewell) Company the 6th Battalion (Notts & Derby) Sherwood Foresters on the 12th April 1908 and witnessed by Herbert Clifford Brooke-Taylor (below).

From this form we can see that Henry was 27 years of age and was born in Helmsley in Yorkshire. He lived in Bakewell and was an architect in the employment of W Wier. This forms also confirms that he had previously served with the 2VB Notts & Derby Regt. from 1900 with the number 5798.

Arrival of the 6th Notts and Derby (#6S of the YMCA series). 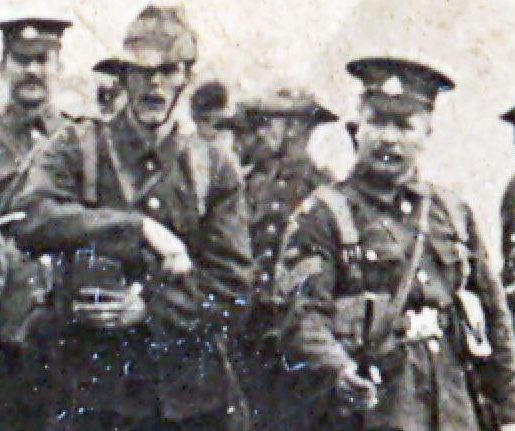 The men are wearing Volunteer style uniforms with shoulder badges and a combination of slouch hats and caps.

The Sergeant in charge of Duke I has a proficiency star and marksman badge, whilst Surg.-Lieut. William Sea is seated on his horse.

The Army Service Record of 115 Jonathan Gettins, a gas fitter from North Wingfield, and recording the Annual Camps of the 6th Battalion from 1908 until 1914, including the aborted Camp at Hunmanby in 1914 (note the dates have not been completed).

Jonathan had originally enlisted into the 2nd Volunteer Battalion on the 20th March 1903 aged 17 and was given the regimental number 7630. He was discharged in August 1914 being medically unfit for further duty having served 6 years and 143 days with the Territorial Force.

“B” Company were stationed at the Drill Hall in Chapel-en-le-Frith and were Commanded by Captain Welch, Lieutenant Winder and 2nd Lieutenant Graham Earwalker. The Senior N.C.O.s included Col.-Sergt. Inst. WL Jackson and Col.-Sergt. Peter Muir. 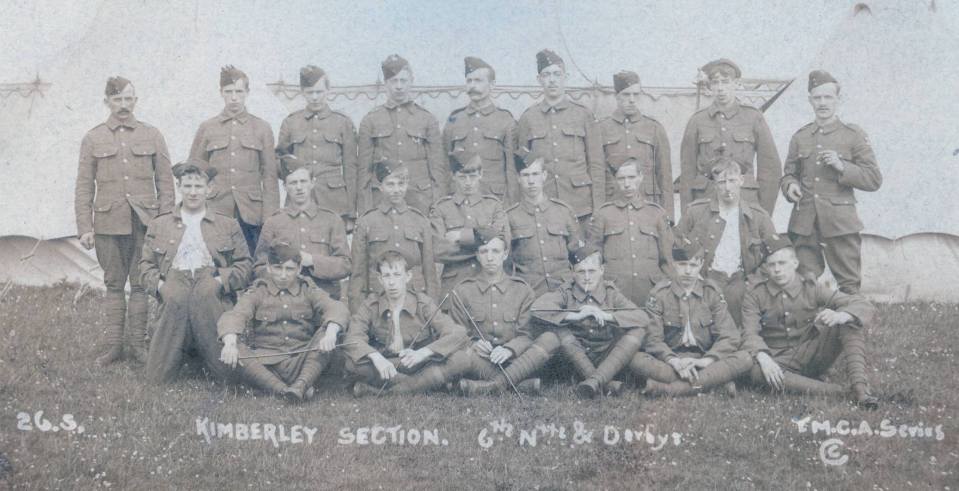 Although the postcard clearly states the 6th N & D, it does in fact show the Kimberley Section of the 8th Battalion. The men still retain the 4th VB Notts & Derby Shoulder badges (see below).

This particular card was sent to Mrs Severn at Spring Hills in Kimberley by her son “JHL” and the post mark confirms it is from the 1908 Scarborough Camp.

The Machine Gun Section is seen practicing in front of the Grand Pavilion on Scarborough Racecourse during the summer camp of 1908. The men are wearing a combination of peaked caps and slouch hats and the 2VB badge is clearly seen on the Sergeant kneeling by the gun carriage. Brigadier Murray is walking away after inspecting the gun crew.

“A” (Chesterfield) Company Sergeants at Scarborough Camp in 1908. 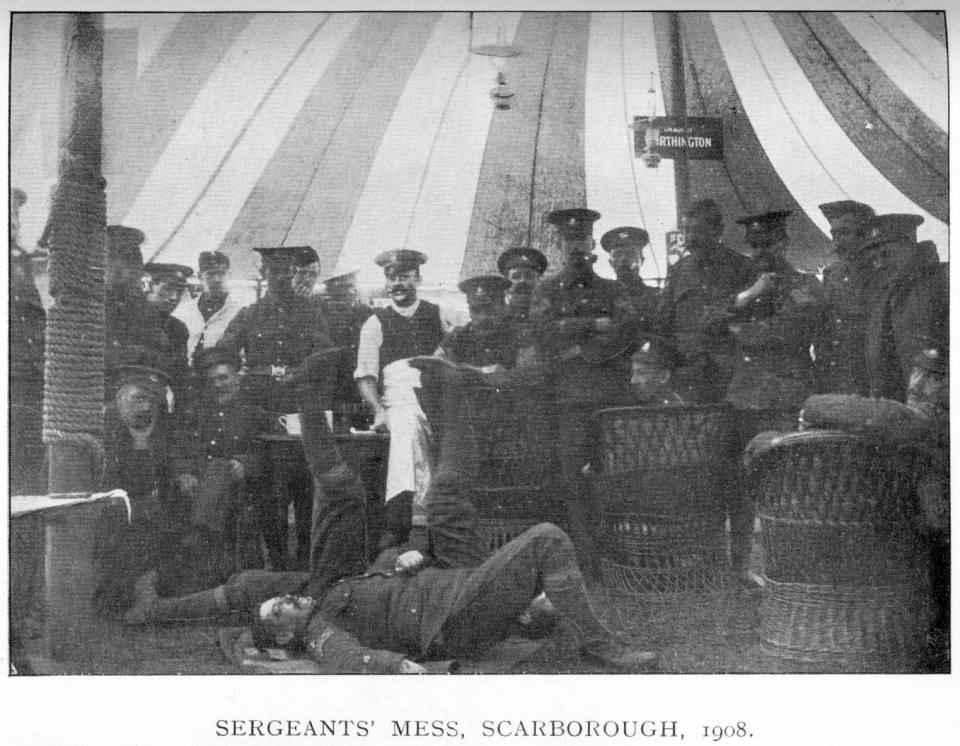 Sergeant Mess at Scarborough in 1908.

111 Sergeant William Henry Cherry was born in 1868 and had previously served in the 2nd VB Notts & Derby Regiment and 8th Company the Derbyshire Yeomanry. He was a butcher by trade and lived in Clay Cross.

He Served in the South African War and was awarded the Queens South African Medal with Cape Colony and Orange River Colony Clasps; he also received the Long Service Medal.

In 1915 William Cherry was the Regimental Quartermaster and arrived in France on the 28th February 1915. He returned to England on the 30th March 1916 and was discharged on 3rd April 1916 as ‘time expired’.