The North Midlanders in March 1916

There appears to be only one ‘soldier’s cemetery’ for the Sherwood Foresters that no longer exists, and this was most likely at the site of the North Midland Field Ambulance on Mont St. Eloi. The Cemetery was probably only used by the North Midlanders during March 1916 when the Field Ambulance was stationed there, although it is known that men of the Sherwood Foresters Brigade were also billeted in the village whilst in Brigade reserve.

Three men of the 1/6th Battalion were later exhumed from this small Cemetery and re-interned in Cabaret Rouge Cemetery.

Graves Registration Report dated 18th August 1925 recording the burial of men in Plot 15 Row “K”. Lying alongside the North Midlanders are men Gunners from the 36th Brigade of the Australian Siege Artillery and the 317th Brigade of the Royal Field Artillery.

Furthermore, three other men from the 46th Division, who were also killed in March 1916, were reburied in the same row at Cabaret Rouge:-

Army Form B. 103 “Casualty Form – Active Service” for George Taylor is the only one to record the original burial in Mount St. Eloi that was preceded over by Reverend John P Hales.

A full list of North Midlanders buried in Cabaret Rouge can be accessed here (Cabaret Rouge NMD reburials). Note that the majority of reburials are those of men killed on the 13th October 1915 during the attack on the Hohenzollern Redoubt.

The Australian Gunners in March 1916

Amongst the men reburied in Plot XV, Row K at Cabaret Rouge Cemetery are three Australian Gunners from the 55th Siege Battery of the 36th Heavy Artillery Group (HAG), who were all killed on 16th March 1916:-

Significantly, they all buried next to each other in Plot XV, Row K, Graves 9-10.

The 55th Siege Battery of the 36th Heavy Artillery Group (Guns and tractors) moved from Frevant to Acq during the night of 13/14th March and were in position by 6.30 on the morning of the 15th March.

At 2.10pm on the same day the Germans began to shell the 55th Battery billets for 25 minutes leaving 2 men dead and 10 wounded.

Harry Robinson and William Klintworth were both ‘killed in action‘ and originally buried in a Military Cemetery “N.W. of Mont St Eloi” and their graves marked with wooden crosses.

Edward Morgan on the other hand ‘died of wounds‘ at the 1st North Midland Field Ambulance and like his comrades was buried at “Mont St. Eloy”.

Edward’s Army Service Record also provides a more accurate map reference for this little cemetery which was being used by the North Midlanders.

The approximate location of the Cemetery is to the North West of Mont St. Eloi and close to the large wood.

Harry Robinson, Edward Morgan and William Klintworth were the first three men of the Australian forces to die from direct enemy action on the Western Front. Prior to the War the 36th Heavy Artillery Group had been part of the Permanent Artillery Forces in Australia. The 55th Battery were equipped with 9.2″ BL Howitzers and more information can be found here.

“We left Taunton for France at 12.55am on March 2nd and arrived at Boulogne at 4pm the same day, the trip across the Channel taking 1 hour 55 minutes. We stayed in Boulogne for four days…We left Boulogne in our motor lorries for the front on March 7tth. It took us three days to get to our destination, as we had to bring our guns along with caterpillars. We have four guns each travelling in three parts. They are splendid guns to fire and very accurate….We were very unlucky when we first arrived, the Germans having spotted our billets and promptly sent over some shells killing three and wounding 14. Most of the chaps were in bed at the time (it was 2.30pm) but the chaps had been working all night mounting the guns. I was on guard at the battery at the time and could hear the shells whistling over my head, being scarcely 400 yards from the billet where the shells burst. I lost my best pal, Sgt Henry Robinson from Fremantle. He was captain of the North Fremantle juniors and extremely popular with all whom met him. He was one of the best non-com’s in the brigade and he is missed very much by the officers and men. His valuable services will never be forgotten. He leaves a young wife and child at North Fremantle…I was his best man at his wedding early in 1915 and feel his loss very much…We fired our first shot on St Patrick’s day at 4pm and the shell had a green band around it for luck.

“A French battery moved out of the Mont-Saint-Eloi position and we moved our guns in at 11.30pm. After working hard all guns were mounted and the caterpillars were away just at day-break. Having returned to our new billet at a nearby farm we were wakened by the Boche shelling Mont-Saint-Eloi. At 2.25pm they suddenly shortened and turned on us landing a shell in the middle of the courtyard. Doc did great work though we lost Sergeant Robinson and Bombardier Klintworth killed and Gunner Morgan died on the way to hospital. Eleven others were more or less seriously wounded. Our ration lorry was burnt in the village…”

Exhumation in March to September 1924

A copy of the letter written to Mrs M Klinworth on the 26th March 1924 informing her that the body of her husband had be re-interred in Cabaret Rouge British Cemetery.

A copy of the letter written to Mrs C Robinson on the 29th September 1924 informing her that the body of her husband had be re-interred in Cabaret Rouge British Cemetery.

A copy of the letter written to Mr W. J. Morgan on the 27th September 1924 informing him that the body of his son had be re-interred in Cabaret Rouge British Cemetery.

There are no surviving records of the exhumation and reburial of the six men of the North Midland Division.

The Commonwealth War Graves Commision have recently released the Burial Returns (Concentration of Graves – Exhumation and Reburials) for Cabaret Rouge British Cemetery and these confirm the location of Mont St. Eloy French Military Cemetery as 51. C. F. 2. A. 90. 00.

The exhumation and reburials was carried out in June 1923 by Registration Officers of Nos. 2 & 3 Areas Imperial War Graves Commision based at Armentieres.

I would particularly like to thank ororkep, rflory, AndrewP, Waddell and stewy of the Great War Forum for their help in telling the story of the ‘Australian Gunners’. 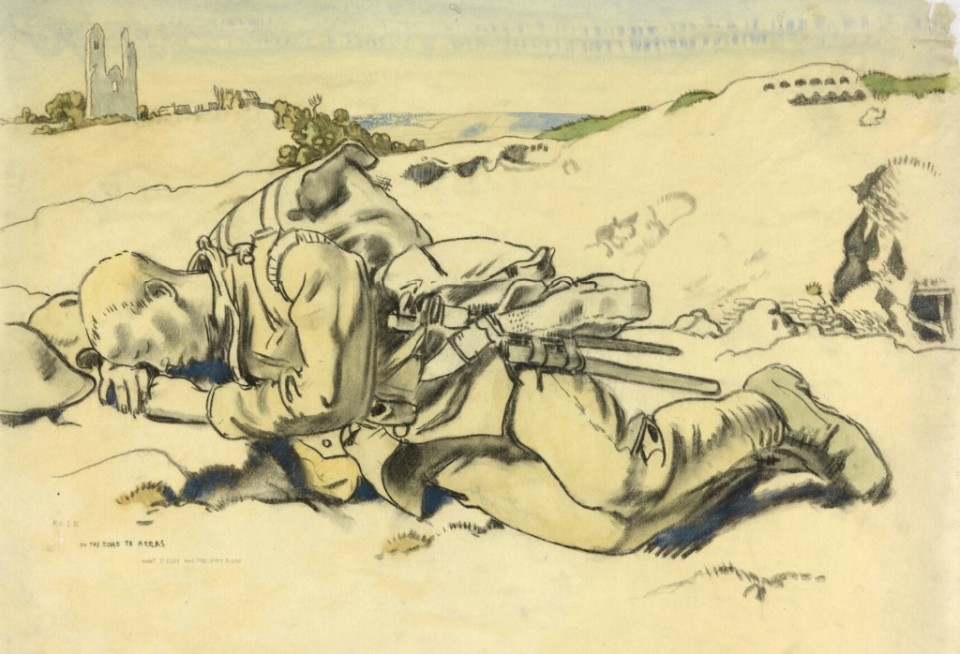 A young British infantryman in full kit lying asleep on the ground. He rests his head on his hands, his steel helmet on the ground near his head. Ruins can be seen on Mont St Eloi in the left background, with the high ground of Vimy Ridge just visible on the horizon. Image Courtesy of the Imperial War Museum © IWM (Art.IWM ART 2990).